Europe’s leading low-cost airlines, a couple of health-care companies, and a maligned online grocer were recommended by investment professionals last Thursday at the fifth annual London Value Investor Conference. Howard Marks, co-chairman of Los Angeles–based Oaktree Capital Group , who appeared at the conference by video link, said he has taken the plunge and invested in oil-related assets. He also suggested that shares of social-media companies are too rich for the value crowd. 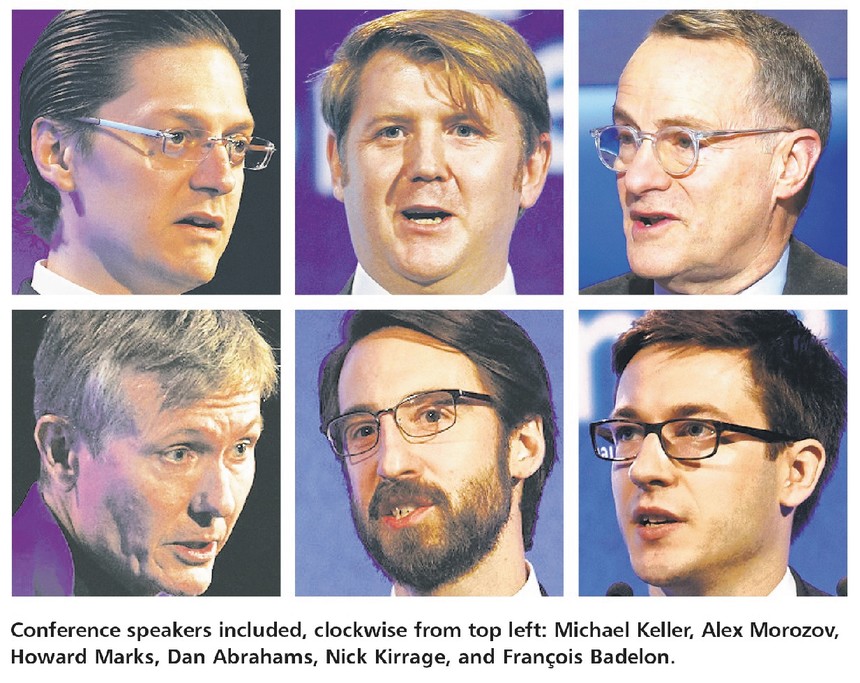 Marks, addressing about 450 attendees at London’s Queen Elizabeth II Conference Centre, blamed lower interest rates for distorting valuations. “Lower base interest rates have made all assets relatively more attractive than they otherwise would have been,” he said.

The manager said he doesn’t consider oil a value investment because it is impossible to calculate its intrinsic value. But he said he has made “oil-related investments,” which he wouldn’t specify, since January, when West Texas Intermediate, the U.S. benchmark crude, slipped below $30 a barrel. WTI oil settled last week at $49.51, suggesting healthy returns for Oaktree (ticker: OAK).

In a recent article in Barron’s, Marks offered some advice to Trump, Sanders and others about playing by rules of the economy.

Other speakers at the conference, which raised 25,000 pounds ($36,555) for the Children’s Rights Division of Human Rights Watch, shared picks including Ryanair Holdings (RYA.Ireland), Europe’s leading budget airline, and easyJet (EZJ.UK). Ryanair was featured in Barron’s European Trader column three weeks ago. Apparently, we aren’t alone in spotting its potential. “Ryanair is a gold nugget in a muddy river,” said Jonathan Mills, co-founder of the SF Metropolis Valuefund, which counts the Dublin-based carrier among its top holdings.

The shares have jumped nearly 10% in the past two weeks, supported by the industry’s lowest fares, relatively low staff costs, and solid profit margins. Mills didn’t offer a price target, but our story suggested that Ryanair’s shares could soar 30% in the next 12 months. At Friday’s close of 14.05 euros ($15.61), they trade for 11 times 2017 estimated earnings.

EasyJet can’t match Ryanair’s growth, but is on a much better trajectory than Europe’s legacy carriers. “As long as Air France-KLM [AF.France] is alive, companies like easyJet and Ryanair have a long way to go,” said François Badelon, founder of Paris-based Amiral Gestion, who recommended easyJet.

EasyJet’s sales, which totalled £4.69 billion in the year ended in September, are growing at about 5% annually. EasyJet plans to hold costs flat through 2019, which will drive profits higher. Earnings per share are expected to grow at a double-digit pace for the next few years at least. The dividend yield, currently 3.6%, could inflate, too, if easyJet ramps up its payout from 40% of profits to 50%.

In the market for medical equipment, Elekta (EKTA.B.Sweden), which manufactures radiotherapy equipment for treatment of cancers, could offer value as a turnaround story. Shares closed on Friday at 65.50 Swedish kronor ($7.85), giving the company a market value of about SEK25 billion. The stock has retreated 9.2% in 2016, but trades for 26 times projected earnings for fiscal 2017. That seems lofty, but its average in the past five years is above 20, and earnings are forecast to accelerate as the company recovers from some missteps.

“Multiples don’t tell you the right story” because analysts’ consensus estimates are below the company’s projections, said Alex Morozov, director of European equity research at Morningstar, who recommended the stock.

BUT ELEKTA is getting its act together, particularly in the U.S., where it is a distant No. 2 to Varian Medical Systems (VAR), although combined they account for about 95% of the market. Elekta’s declining share seems to have bottomed out, aided by a new strategy focused on targeting large networks and aftermarket services. A new chief executive steps in next month, the third in two years.

Morozov sees enormous potential for Elekta’s linear accelerators and surgery devices in emerging markets, where many patients don’t have access to radiotherapy. Sales, estimated at SEK11.4 billion in the year ended in April, could grow 6% to 8% annually for the next five years, and profit margins, in the teens in recent years, could surpass 20% by 2018.

“The market is missing that the company’s wide economic moat is intact,” said Morozov, who put fair value at SEK90, or 37% above the latest share price.

Another health-care sector play, recommended by Michael Keller, co-manager of Brown Brothers Harriman’s Core Select fund, is Perrigo (PRGO), which manufactures over-the-counter consumer goods and specialty pharmaceuticals. Perrigo’s problems include the end of big price increases; its shortcomings were highlighted in the Trader column on May 7. But Keller and his colleagues think a selloff in the stock presents an opportunity. Perrigo shares, which traded on Friday at $96.61, have lost a third of their value since the start of the year and sell for just 10.4 times estimated 2017 earnings.

“The share-price weakness has been overly severe,” said Keller.

Drivers for the stock include a demographic shift to increased pharma usage, store-brand products taking market share, and the conversion of $29 billion of prescription medicines to OTC products in coming years.

EUROPE’S BANKS have plenty of challenges, but Schroders fund manager Nick Kirrage believes that Royal Bank of Scotland Group (RBS.UK) is undervalued. It is majority owned by United Kingdom taxpayers following a government bailout during the global financial crisis, but the bank has gone a long way to turn things around. From 2008 to 2015, its loan book and risk-weighted assets came down by more than 60%, while its regulatory capital increased. RBS is almost a pure-play retail and commercial bank with no investment-banking risk.

Dan Abrahams, managing partner of Alfreton Capital, said U.K. online grocer Ocado Group (OCDO.UK) could be a winner. The stock, which sells for 80 times estimated 2017 earnings, is also a favorite among short sellers. Facing greater competition in the market for grocery deliveries in the U.K., especially if Amazon.com (AMZN) enters the fray, Ocado could profit from licensing its software to bricks-and-mortar grocers that offer delivery services at a loss. The company continues to plow money into investments.

There was plenty of talk about emerging markets. James Montier, on the asset-allocation team at GMO, says they are genuinely cheap versus developed markets, especially after resources and financial stocks are stripped out. Jean-Marie Eveillard, formerly a portfolio manager at First Eagle Investment Management and now a board trustee, sees potential in India. “I am much more positive in the long term about India than I am about China,” he said.